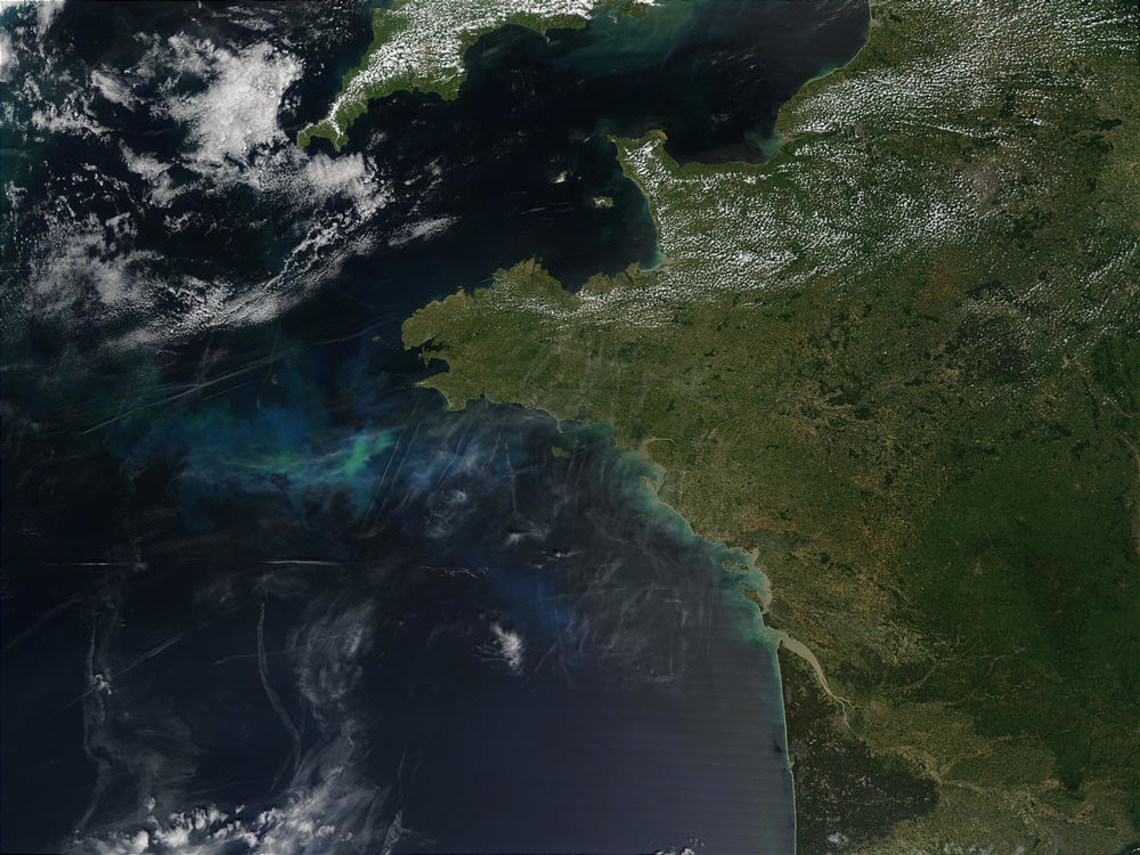 Multiple parameters of the surface layer can be retrieved from space and the most known are the chlorophyll-a and the suspended matters concentration, the turbidity and the light diffuse attenuation coefficient. Phytoplankton contains chlorophyll pigments which absorb light preferentially in the blue. Suspended matters reflect and absorb light, modifying the optical properties of the water. Coloured dissolved organic matters absorb light in the short wavelength.

The OC5 algorithm, developed at Ifremer, pays a particular attention to the effect of the suspended matters, abundant on the European shelf, on the retrievals of the Chlorophyll-a from the satellite radiances. Defined to give similar results as the standard OC4 algorithm in clear waters, OC5 has proven to be efficient on the 10 years data set of SeaWiFS, MODIS and MERIS data archived at Ifremer in most of the conditions observed in the Bay of Biscay, the English Channel, the Southern North-Sea and the Western Mediterranean Sea. The performance of the algorithm is continually evaluated through comparison to in situ data available at Ifremer (REPHY network) or obtained from the Somlit (INSU/CNRS) network. This calibration work, based on Service Level Agreements with users, has been encouraged by the MarCoast project (a GMES Service Element) funded by ESA (European Space Agency).

Global distribution of photosynthetic organisms in the world's oceans from space is a relevant indicator of the physical and biological processes that occur in the oceans. Chlorophyll-a satellite maps are used in several applications such as the evaluation of the phytoplankton biomass, the eutrophication risk through the percentile 90 of the chlorophyll distribution, the determination of ocean productivity and the rate at which the oceans sequester atmospheric carbon dioxide. Together with the chlorophyll concentration the Ifremer?s method proposes the mineral SPM (Suspended Particulate Matter) at surface. High loads in mineral SPM is observed in rivers plumes and in resuspension on the continental shelf after winter storms or strong tides. The SPM content of the water column has a strong effect on the water clarify which is often, in winter and at the beginning of spring, the limiting factor of the phytoplankton growth.

The first observations of ocean color from space were carried out by the Coastal Zone Color Scanner (CZCS), a radiometer with visible and infrared spectral channels embedded on NASA's Nimbus-7 satellite from 1978. Today we are using three sensors at Ifremer, MERIS , launched in 2002 by the European Space agency, SeaWiFS and Modis Aqua, launched respectively in 1997 and 2002 by the NASA. These three sensors observe the whole planet following a polar orbit around the Earth.

Eutrophication (excessive algae growth that leads to lack of oxygen in the water) produces an undesirable disturbance (leading sometimes to death) to the organisms present in the water and therefore to the quality of the water concerned. Thus, chlorophyll-a concentration, as a proxy of phytoplankton biomass, is a parameter that can be used to evaluate the eutrophication that occurs more often in coastal waters. The publication of the Directive 2000/60/EC of the European Parliament establishes a list of parameters that are used to monitor the quality of coastal waters within coastal waterbodies. The percentile 90 of Chlorophyll-a has been retained for the evaluation of the eutrophication risk. The spatial extension of the in situ monitoring networks (REPHY, SOMLIT, SRN...) by using remote sensing products creates a monitoring system able to meet the requirements of the Water Framework Directive.

The spatial coverage and the frequence of the satellite ocean-color imagery tend to offer an attractive alternative to the in situ data to estimate primary-productivity for relatively large areas of the ocean. Satellite estimations of near-surface chlorophyll are used as an initial estimation of phytoplankton biomass as input to mathematical models of primary productivity. Model predictions of primary productivity are then used to calculate the potential cumulative increase in phytoplankton biomass. The attenuation coefficient of the descending diffuse light, Kpar, can also be derived from the mineral SPM provided by Ocean Colour satellites and used as a forcing input in the biogeochemical models used at Ifremer for the Previmer project of coastal operational oceanography.

Approximately 99% of the carbon now stored in the biosphere resides in marine sediments. A small fraction of the dead phytoplankton reaching the sea floor remains intact, contributing to the fixation of the carbon. The processes governing the formation and dissolution of this carbon reservoir are correlated to climate change. Satellite derived chlorophyll concentrations are used as input of global carbon models.