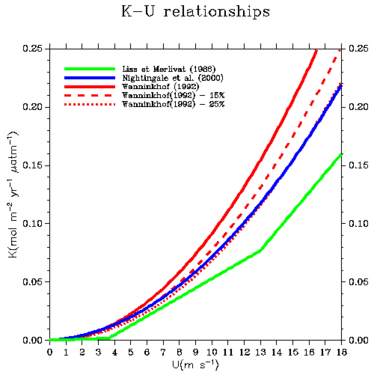 Several attempts have been made to relate air-sea gas transfer velocities, k, to wind speed, U. Relating k to U is not completely satisfactory because k is known to be driven by sea surface roughness which is not only dependent on wind speed and alternative approaches attempt to relate k to sea surface slopes (Frew et al., 2004) that is accessible using dual-frequency altimeters. However, scatterometer instruments provide a much better spatial coverage than altimeters.

As expected from older studies, global mean K values deduced from these 3 k-U relationships are quite stable temporally (no seasonal cycle) but the K deduced from various relationships disagree by up to a factor 1.8 and this factor varies regionally (Boutin et al., 2002).

The Liss and Merlivat [1986] parameterisation was deduced, taking into account the physics of the air-sea interface, from wind tunnel measurements. Lake measurements were used for normalisation. It is divided in three regimes, smooth surface, rough surface and breaking waves regimes:

The Nightingale et al. [2000] parameterisation was deduced from dual tracers experiments at sea:

The Wanninkhof [1992] parameterisation used a quadratic fit to the bomb 14C inventory. Since we use high resolution satellite wind speeds, we choose the parametrisation suitable for short term wind speed: