Microwave instruments and in particular satellite-borne radars, such as scatterometers, are of major interest, first because of their large temporal and spatial coverage and second because of their all-weather measurement capability. Such instruments are flown on the European Space Agency and EumetSAT satellites. The development of specific data analysis methods for these radars led not only to the estimation of global ocean surface wind fields (the primary objective for these sensors), but also to the detection of sea ice and to the estimation of its extent, type and displacement. 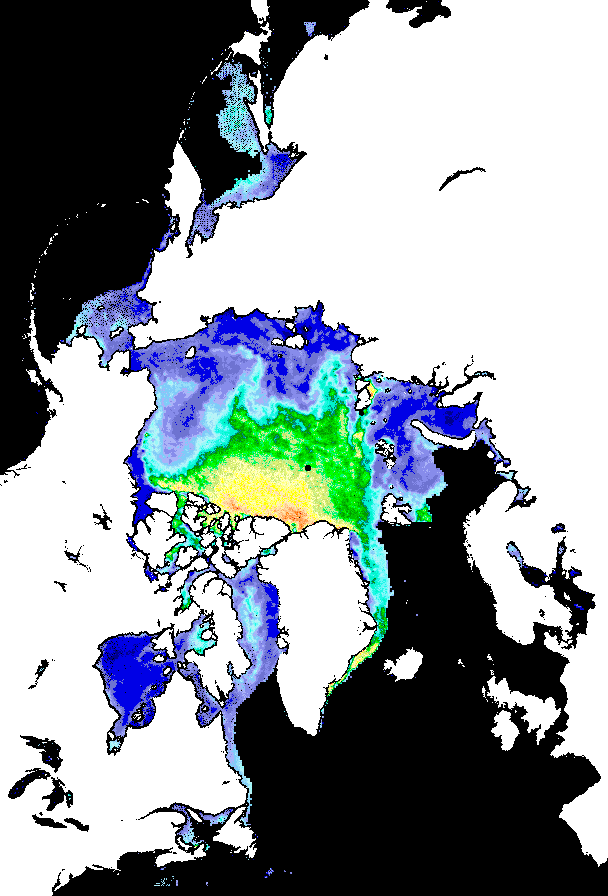 The European Remote-Sensing Satellites ERS-1 and ERS-2 have been launched by the European Space Agency respectively in 1991 and 1995, each carry a C-band scatterometers, primarily dedicated to sea surface wind field measurements. In 2006, the first Advanced Scatterometer ASCAT has been launched successfully. These scatterometers are respectively a three- and a six-antenna radar at 5.3 GHz. The beams sample the sea surface at azimuth angles of 45°, 90° and 135° with respect to the satellite flight direction. The radar illuminates a 500 km wide swaths at incidence angles ranging from about 20° to 60°.

One fourth of the backscatter coefficients obtained from the scatterometers are generated over the polar oceans. In active microwave, sea-ice areas appear as isotropic surfaces. Their signatures are not related to the azimuthal angle but to the incidence angle of the observation and the radar backscattering varies considerably with the incidence angle.

Over polar oceans, values of sigma0 measurements (backscatter coefficients) depend on the dielectric properties of the observed materials: sea water, first-year ice and multi-year ice, on their relative concentrations and on surface topography. As sea ice ages, its dielectric properties, linked to volume and surface scattering, as well as its surface roughness are modified. Sea ice characteristics can be derived from sigma0 levels at prescribed incidence angles, and from sigma0 variation with incidence angle at low incidence. In summer, surface melting of sea ice changes the sigma0 signature and renders more difficult data interpretation.

Four different curves of the backscatter, expressed in dB, as a function of the incidence angle can be related to the composition of the observed surface, thus the ice type.

The main applications of this type of data need regularly space and time gridded sea ice fields. Because of the limited size of the measurement swath and of the quasi-polar orbit, the data measurements are discrete in both time and space. Methods have been developed to provide regularly spaced fields over ocean basins.

Japanese and American satellites have also carried scatterometers (respectively NSCAT launched in 1996 and QuikSCAT in 1999) at Ku-band, providing similar information and with better spatial and temporal resolution. The European Agencies are jointly planning a series of operational double-swath C-band ASCAT scatterometers for flight until 2020 with the three MetOps satellite series.

The sea ice data are produced daily, with 25 or 12.5 km spatial resolution depending on the sensor. These data are available on the CERSAT FTP over 20 years (1991-present) from the ERSs, NSCAT, QuikSCAT and ASCAT sensors. Detailed information can be obtained from CERSAT web site or by e-mail fpaf@ifremer.fr.