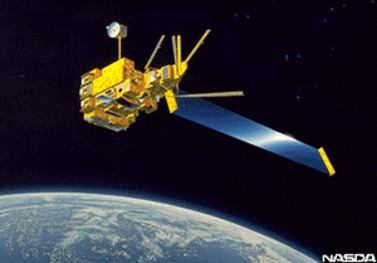 The Japanese satellite ADEOS-1 (Advanced Earth Observing Satellite) was launched in August 2006. Its main relevant onboard sensor for oceanography is NSCAT, a double-swath scatterometer (measurement of the surface wind speed and direction over the ocean), built by NASA. Compared to the ERS scatterometer, this sensor provides more measurements, in another frequency band (Ku). Unfortunately, due to a failure in its solar array, ADEOS was lost on June 30th 1997.

NSCAT is a Ku band Scatterometer operating at 14 GHz. It has two swaths 600 km wide, located on each side of the satellite track, separated by 300 km. The mid-antenna has two polorizations VV and HH. As ERS, these antennas measure the backscatter at the earth surface also called Sigma0.

For each 50 x 50 km cell, called Wind Vector Cell (WVC), NSCAT measures up to 24 Sigma0 which are used to retrieve the 10 meters surface wind (module and direction). This wind is available with a spatial resolution of 25 and 50 km.