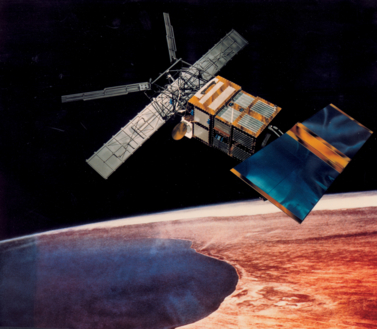 ERS-1 was the first of two twin earth observing satellites launched by ESA respectively in July 1991 and April 1995. It included, in addition to other instruments, several sensors relevant for oceanography such as the RA radar altimeter (measurement of the sea surface topography, the wave height,...), the AMI-Wind scatterometer (measurement of the surface wind speed and direction over the ocean), the SAR (measurement of wave spectra) and the MW micro-wave sounder (brightness temperature, atmospheric vapour content,...).

The ERS-1 mission ended on 10th March 2000 (its sensors had been on stand-by since 1995). Nevertheless, thanks to the length of the ERS mission (more than 15 years), an impressive continuous and homogeneous series of sea surface parameters could be collected all along the mission.

The plateform is based on an existing design developed for the French SPOT satellite. Payload electronics are accomodated in a box-shaped housing on the plateform, antennas are fitted to a bearing structure.

ERS-1, the first satellite of this programme was launched in July 1991.

The ERS-1 mission is essentially turned to the multi-year monitoring of oceans, ice zones and coastal regions. Its platform carries active instruments which measure physical parameters such as significant wave heights, wind speeds and directions, or sea surface temperature.

In short, the ERS-1 platform contains complementary instruments allowing observations of Earth with high accuracy, in all weathers, night and day.